The Roetheli Lil’ Red Foundation’s inspirational film, The 25,000 Mile Love Story, won “Best Humanitarian Documentary Film” at the May 30-June 2 People’s Film Festival in New York City, which celebrates the power of the media when placed in the hands of the people. The honor was announced recently by Joe and Judy Roetheli, CEO and President of the Lil’ Red Foundation.

The 25,000 Mile Love Story chronicles the amazing journey of Serge and Nicole Roethelis’ Run for Kids World Tour. The thirty-five-country, six-continent Run for Kids World Tour had a dual purpose: to prove Serge’s endurance running ability, and to raise awareness of the plight of children in third-world countries. Serge ran the entire distance, while Nicole was at his side on her Yamaha 125 motorcycle with their “home-sweet-home” pup tent and necessary supplies in tow on a small trailer. The 25,422-mile run circumnavigating the globe took 1,910 days, or an average of a marathon every other day for 63 months— the equivalent distance of 970 marathons.

The adventurers encountered many challenging conditions including civil wars, dangerous wild beasts, venomous snakes, extreme heat, snow and ice, and frigid temperatures. Both Serge and Nicole were stricken with severe cases of malaria, and Serge suffered a fractured arm when hit by a vehicle. In spite of these and many other challenges, they persisted to the finish line and raised over $400,000 to support humanitarian efforts in Africa, South America, and Central America. Many refer to Serge, a Swiss native, as the greatest endurance athlete ever, as this Run For Kids World Tour is just one of Serge’s many fascinating lifetime endurance achievements.

To hydrate his body and supply vital calories, Serge drank over six tons of Coca-Cola on this global trek. He and Nicole visited hundreds of McDonald’s for nourishment, to use clean restrooms, to find comfort from the elements, and to have a great place to check the mechanical condition of Nicole’s Yamaha motorcycle and trailer.

John Davies, critically acclaimed producer and Emmy-nominated documentarian commented: “This film is a love story, but not just in the normal sense. It depicts a couple in love, but the film also conveys Serge and Nicole’s love for kids and those in poverty, their love of freedom, their love of adventure, their love of nature, and their love of athletic achievement. Amazingly, Serge and Nicole had no financial sponsor. They had no support team with them or back home–just the two of them ‘against the world’, so to speak.” One of Serge’s prominent philosophies is that “anything is possible if one is willing to pay the price”, and this Run for Kids World Tour certainly reflected that mindset.

The Lil’ Red Foundation, headquartered in North Kansas City, Missouri, sponsored the production of this inspirational film and three books published by Dunham Books—The 25,000 Mile Love Story, Nicole’s Diary and Keep on Running. Joe and Judy Roetheli, executive producers affirmed: “We are honored that the film was recognized for its true humanitarian merit, which was in fact our inspiration for creating this film. The Foundation has published three books by Serge and Nicole.” 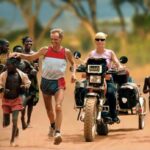